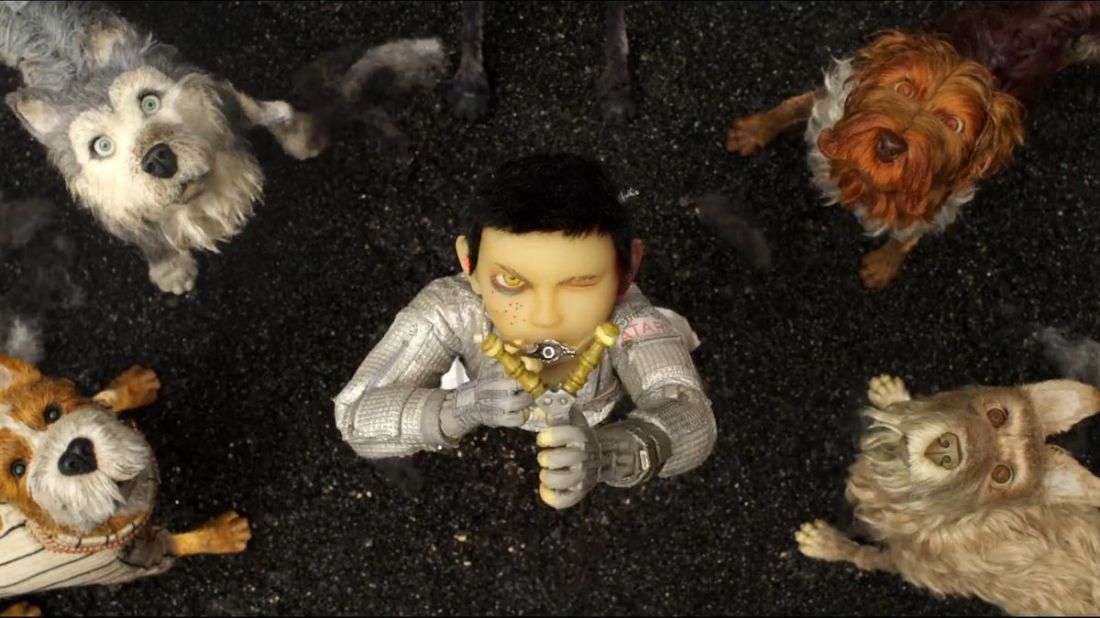 Wes Anderson’s ostentatious style of direction can mostly come off in one of two ways. It can either imbue it’s worlds with a sense of quirk that mirrors the oddball charm of its characters, or it can feel like a lot of overwrought technique for its own sake. Luckily, with Isle of Dogs, the form matches function. Anderson’s diaroma-esque shot composition and inclination towards right angles feels more natural in the fully constructed worlds of stop motion animation. Here, suspension of disbelief is a necessary buy-in, animation more clearly marked as artifice than live action productions.

Isle of Dogs heralds Anderson’s return to the world of stop motion, functioning as something of a visual successor to The Fantastic Mr. Fox. It takes place in a near future Japan, in which a combination of illness and public manipulation has led to a government decreed exodus of the canine population from Megasaki City to Trash Island. A young boy, Atari Kobayashi, flies a plane to the island in search of his bodyguard dog. He soon becomes embroiled in a conflict between the dog-hating Kobayashis and the surviving pets.

While Anderson’s dollhouse shot compositions and frequently artificial character interactions can generally cause a distancing effect, Isle of Dogs has him at his most humanistic. Against the backdrop of a genocide against man’s best friend, concepts of hatred, fear mongering, and brotherhood are hammered home through the endearing cast’s heroic actions. Having cited Akira Kurosawa as the major inspiration for his latest, Kurosawa’s predilection towards depicting the struggles of humankind in grand, beautiful strokes is emulated wonderfully.

Although Atari isn’t developed much past his purpose for the story, as all of the Japanese characters speak their language with only occasional diagetic translation, the Dog pack that accompanies him makes for an entertaining ensemble. The character relationships are well founded in the loyalty and love that defines the owner-pet dynamic. In a movie where heartfelt reunions and turning points are often marked by teary eyes for those involved, I found it hard to suppress my own.

Along with his usual themes of the struggle to connect with others, Isle of Dogs marks the director at his most political. On the surface, it’s about the never ending conflict between cat and dog lovers. But this affable presentation thinly conceals a story with far more meat, one about generational prejudice, and those who fight back against it.

Similar to the dramatic beats, the comedic timing works like clock-work. The laughs come through the visuals frequently as through the script. Western stand offs lead to over-dramatic showdowns. Camera movements and symmetrical staging punctuate the absurd scenarios our talking dogs find themselves in. The ornate puppets are expressive, and the voice work, which is backed by an all star cast, is similarly convincing.

Despite its heartfelt content, there are still some troubling plot elements. While the accusations of cultural appropriation only moderately bothered me, mostly in the stereotypical depiction of the main villain, there is some minor usage of the outdated “white savior” trope. The fact that a white character in Japan had such a major impact in the story was tempered by the fact that she was the film’s only strong female character, but it was still somewhat grating.

Quibbles aside, Isle of Dogs is a triumph. It is a synthesis between a very particular aesthetic, and a story that’s grandiose nature can support that aesthetic. Sweeping shots over impossibly meticulously crafted worlds deliver us into the mind of one of Hollywood’s most idiosyncratic directors in his prime. It’s lovingly rendered and timely piece of animation, which tells a large scale story with intimate detail.

7 thoughts on “Isle of Dogs Review”