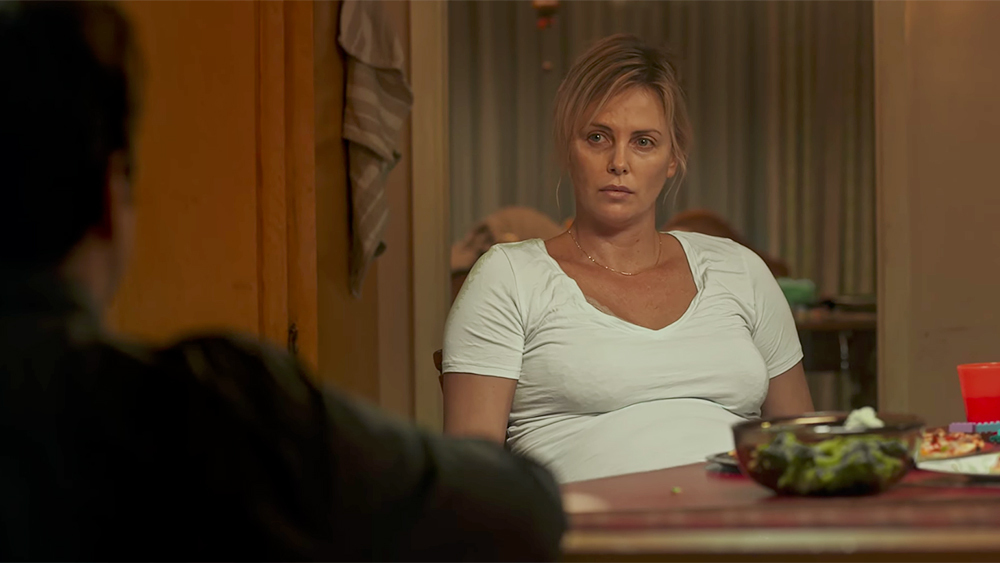 One of the best things about smaller scale filmmaking is that it allows for points of view that simply don’t make it into larger films. Although the perception of what is actually “marketable” is changing due to a string of upset box office performances, Hollywood is still very much stuck in its ways. The dramedy Tully offers an empathetic insight into trials of motherhood, candidly presenting its middle-aged lead Marlo (Charlize Theron) without any glamor or glorification. Theron continues to prove herself as one of the most talented actors in the business, her quips and sense of humor seamlessly melding into the total physical and emotional exhaustion of child-rearing.

A mother of two with a third on the way, Marlo finds herself with a choice. Her wealthy brother offers her a great mercy, to pay for a night-nanny service that will take care of her baby through the otherwise sleepless evenings. At first she is hesitant to have her baby raised by another person. But after dealing with the onslaught of a newborn mostly alone, combined with the burden of her older children, she finally snaps and calls the service. From there emerges an initially hesitant but increasingly familiar relationship between Marlo and her new nanny Tully (Mackenzie Davis), a free spirited 26 year old who is good with kids and an all-around fixer.

Director Jason Reitman (Juno, Up in the Air) is back with his distinctive knack for low-key dramas about average people just trying to get by. Well mostly average, screen writer Diablo Cody (also Juno) imbues the two leads with a wit and specificity that elevates them above their respective cliches. Marlo is a world-weary mom, but her dry sense of humor is a consistent delight. Through the repeated use of montage the monotony of raising a baby is brought to life. The sleeplessness nights, the mounting frustration, the relentless crying, loop over and over again in a unbending barrage. Theron perfectly delivers the fatigue leading up to the eventual breaking point.

She has completely transformed into this character, her increasing desperation as she feels the full weight of time pressing down on her is palpable. Her nanny Tully represents the counter-balance, a window into Marlo’s own youth who slowly helps her realize the importance of what she has. The nanny Tully starts off a somewhat of a played out hippy-dippy type, but as she gets to know Marlo better she becomes less of a persona and more of a fleshed out person. The bond they form serves as a glue that holds the film together, two somewhat dissimilar people slowly finding out their common ground and growing from one another.

While it’s two leads have excellent chemistry, some of the supporting characters get short-thrift. Marlo’s brother fails to distinguish himself from a vaguely-douchey rich guy mold, and his wife is merely a symbol of privilege. While Marlo’s husband gets some decent scenes near the climax, he’s largely just a typical somewhat despondent father who frustratingly seems to do nothing to help his wife out. But in some ways that’s the point, Marlo shouldering the majority of the burden like so many other woman.

Tully is an ode to Mom’s everywhere. It’s a memorial to the mostly thankless trials of raising kids, and is brought to life through the sympathetic Marlo. It meanders somewhat despite its short run-time, and it can feel slightly dramatically redundant, but it delivers on its through-line of highlighting this underappreciated challenge admirably. It also features a bold conclusion that will likely be seen as polarizing. Some will herald it as completely justified by what came before, elevating its themes about the struggle of aging, and the loss of the old self (a discussion of Theseus’s paradox makes an appearance). Others will deride it for coming out of left field, an unnecessary genre shift that derails an otherwise grounded and low-key drama. I find myself leaning towards the former, the pivotal final scenes meshing with the themes and subtle hints that were dropped throughout. It may not set the world of cinema ablaze, but there is certainly room for small-scale pieces that bring to life a common but marginalized perspective.

2 thoughts on “Tully Review: Just In Time for Mother’s Day”